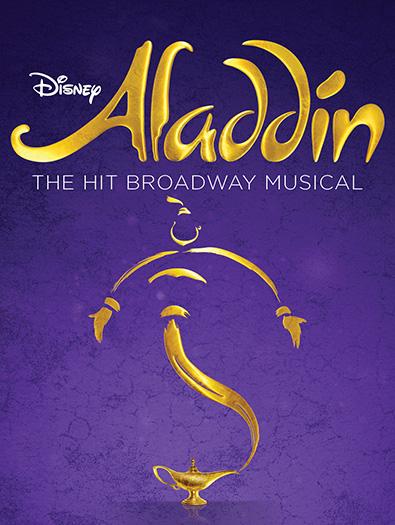 Best availability in weeks 2 and 3!

From the producer of The Lion King comes the timeless story of ALADDIN, a thrilling new production filled with unforgettable beauty, magic, comedy and breathtaking spectacle. It's an extraordinary theatrical event where one lamp and three wishes make the possibilities infinite.

Hailed by USA Today as "Pure Genie-Us," ALADDIN features all your favorite songs from the film as well as new music written by Tony® and Academy Award® winner Alan Menken (Newsies) with lyrics penned by the legendary Howard Ashman (Beauty and the Beast), Tony Award winner Tim Rice (The Lion King, Aida), and book writer Chad Beguelin (The Wedding Singer).

Directed and choreographed by Tony Award winner Casey Nicholaw (The Book of Mormon, Something Rotten!),this "Fabulous" and "Extravagant" (The New YorkTimes) new musical boasts an incomparable design team, with sets, costumes and lighting from Tony Award winners Bob Crowley (Mary Poppins), Gregg Barnes (Kinky Boots), and Natasha Katz (An American in Paris). See why audiences and critics agree, ALADDIN is "Exactly What You Wish For!" (NBC-TV).

ASL Interpretation is available for this performance by request. Request must be made at least two weeks out from the show's opening. Based on availability through the ASU Gammage Box Office.

ALADDIN is a gorgeously produced show that’s a delight from start to finish. The beloved characters from Disney’s 1992 animated hit are given fresh life, including the Genie, who leads two show-stopping musical numbers. The costumes and set design are among the most beautiful on Broadway, and Aladdin and Jasmine’s magic carpet ride to “A Whole New World” inspires gasps of delight. Children of all ages will be wowed by the story, the songs, the staging and the spectacle of ALADDIN. This is a must-see for families and a show kids will never forget. Reminder, all guests require a ticket, regardless of age.

Running time: 2 hours and 30 minutes with a 15 minute intermission.